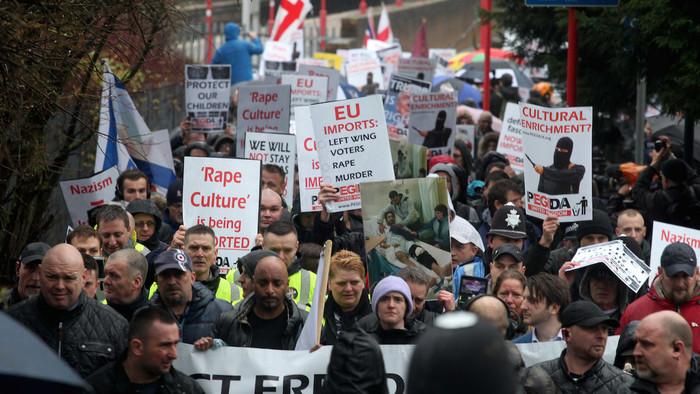 Recent developments in world politics have led to the resurgence of popularity and influence for nationalistic parties. What is problematic about this trend is the rhetoric used by leaders and supporters of these parties, a rhetoric that at best resembles that being used during the interwar period, and at worst invokes similar political actions. If we take into account rising educational levels and the presence of more and more globalised social communities, such a trend becomes even more concerning. In a world that is increasingly interconnected through social media and prompt availability of information, multiculturalism should be the general credo, yet in recent years (and particularly in the last few months) we’ve been experiencing a strenuous fight towards the preservation of the nation. Particularly significant has been the Brexit referendum, which represents the culmination of populist and demagogic rhetoric rather than sound economic considerations. Not only has the Leave campaign lied about the economic benefits that would have followed from leaving the Union, but it has portrayed immigration as the plague of British society, stressing on the need to “take our country back” as if it somehow belonged to some entity other than its citizens. With less clamour yet equally dismaying consequences, Hungary and Switzerland have also held popular referenda to reduce immigration. The German far-right party Alternative for Germany has enjoyed considerable success at the capital’s elections. The Austrians still need to figure out whether they want a far-right president or not. The Americans have elected a Republican presidential candidate who advocates building walls, banning Muslims from entering the country, and highlighting the ones already present with special ID cards.

The idea that national culture is under attack and should be celebrated (often at the expense of others) has led to the implementation of a series of controversial policies and initiatives. Particularly representative is the institution in 2007 of a French Ministry of Immigration, Integration, National Identity and Co-development aimed at improving the social cohesion of the nation by combining national identity policy and migration policy, a move that was only supported by the French far-right party National Front. Two years earlier, the Danish Minister of Culture, just after the start of the “Danish Cultural Project”, claimed that a “medieval” Muslim culture on Danish soil would have never been as valid as the Danish one, and he cited “cultural rearmament” as the strongest weapon against multicultural trends. A similar project was introduced in the Netherlands, but where the Danish sought to intensify feelings of Danish belonging and “Danishness”, the Dutch took a substantially different approach by presenting a structural framework for a public constructivist debate on identity and nationality. What is more, the reluctance to move towards multiculturalism has often culminated in repressive policies – a remarkable example of which is the ban on the burkini employed by several French maritime cities.

Despite uncertainty over how national identity is supposed to save the nation from economic crises, terrorism and war, it seems like its preservation is exactly what a large share of the population demands to reach more security and development. But why does this happen? In a book on contemporary nationalism, Brown distinguishes between three explanatory approaches. A primordial approach to nationalism sees the nation as an entity that rises from a natural, organic community which ultimately determines the identity of its members. Members of this community experience an innate attachment to it, leading them to feel prior moral obligations to each other, over and above any obligations they owe to other communities. On the other hand, a situationalist approach to nationalism explains it as the culmination of a process through which individuals seek to fulfil common interests. It is therefore subject to the threats and opportunities of the period in which it occurs. A psychological approach considers nationalism in view of its ability to portray itself as a family. The anxieties and fears that human beings experience when they relate to the external world are escaped through developing a sense of belonging and stability. At the micro level this function is served by the family, whereas at the macro by the nation. What these approaches have in common is the idea of “separation”. In order to define yourself as part of a certain nation, you must take distance from anything beyond it. The tool to determine the boundary is national identity, using common language and culture to define who is a community member and who is a foreigner.

Arguably, it could be said that this form of association is natural, that human beings are simply born and raised in nations. But this form of association is not natural. It is true that human beings are born and raised in nations, but it does not necessarily have to be. The concept of “nation” is actually a fairly recent one. The nation-state was born just a couple of centuries ago, and in most cases it was not natural at all, but forced upon populations by leaders and commanders. No wonder there are parties who seek independence of their regions in almost all countries. It could also be argued that the very fact that there are parties seeking independence proves that each and every one of us has the need to belong to some place, which is ultimately the nation, regardless of its size. But that is not true either. Independence movements are mostly politically motivated, just as all religious wars are. It isn’t cultural clashes that drive the need to separate, but politics. And politics is not natural, but again, forced upon us. If we start questioning the boundaries between insiders and outsiders, we realize that they are not agreeable to all, and there is no truth in something that cannot be agreed upon.

This does not imply that we could get rid of nations completely and become citizens of the world. Nations have a political value and serve organisational purposes, but nothing more than that. Think of the modern world as a well organised supermarket. Each aisle contains specific products, from gardening to cooking to stationery, and mixing such products would result in complete chaos – costumers would not know where to look and start wandering around for hours. The supermarket is therefore organised around the use we make of products. Similarly, the world is organised in nations. People are the “products” of each nation with the only difference that moving them around would not cause chaos. People, contrary to steaks or pens, have the ability to integrate in new environments and to bring something new with them. Each citizen possesses human capital made of their education, their skills, their history, their language, and relocating that capital to a new setting would not fundamentally change its nature, rather enrich it. Cultural clashes occur when people decide to make their differences an issue rather than a point of dialogue. Fighting for the preservation of national identity is exactly that: making an issue out of something that should instead be a point of dialogue. National identity and the integration and acceptance of minorities are not mutually exclusive. Promoting one would not necessarily damage the other. We should therefore see the nation for what it is: a well organised machine made of and for people, whose only purpose is to make domestic and international affairs work smoothly. If we see it instead as the principle according to which someone’s existence is worth more than someone else’s, we lay the basis for conflict. Such a perception of the nation has led and is still leading to the worst tragedies in history, and campaigning for it is not only wrong but also dangerous.